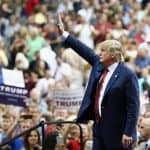 The Donald has done it again. At his rally in Florida on Saturday the US President referred to a security incident in Sweden which turned out to be fake. He told his supporters “look at what’s happening last night in Sweden”, as he listed places in Europe attacked by terrorists. It later emerged he was […]