For the fourth in our series examining how small businesses manage their PR, we spoke to Karen Kelly, who founded the Thames Valley based cleaning franchise Cleanhome back in 2010. She works with our friends at Cerub PR.

Karen has a corporate background – she worked at Disney and Virgin Atlantic. She to set up the business because when she was working 14 hour days and wanted a better work-life balance. She had been on the wrong end of too many cleaning firms and thought she could do much better.

She did phenomenally well – growing extremely fast despite founding a perceived “luxury” in the midst of a recession.

There was more of an appetite for cleaners, it was recession proof. I think the people left in jobs were being asked to work harder and longer so their leisure time was becoming more precious and something had to give.”

Karen was keen to start the business on firm foundations so she ensured her leaflets, website and other materials were as professional as possible. She initially did the leafleting herself to test the water and monitor the response before using an external service.

After a year, Karen had 80 cleaners on her books, and realised that the model she used was perfect for franchising.

A friend who lived in Gatwick said: “That’s a great business model, I wouldn’t mind trying it around here”, and in 2012 he became my first franchisee. 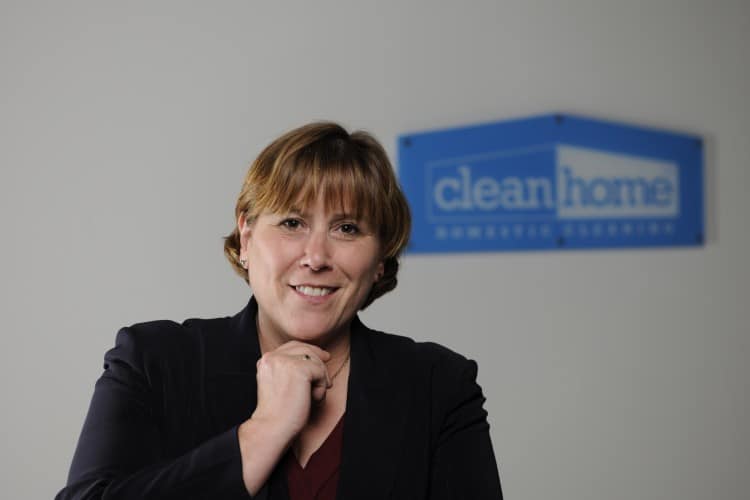 Karen now has 17 franchised outlets across the UK, and that number is ever increasing.  To support the business and her franchisees, the company built its own bespoke internet based operational system GENESYS™, which organises the total process/administration and finance aspects of the business and is unique to Cleanhome in the cleaning franchise industry.

She also brings her corporate experience into the business, with a strong focus on training, supporting and adding value for the franchisees.

It wasn’t until earlier this year that Karen decided that she should invest in some PR.

I had these franchisees, and GENESYS™ and the training programme, I thought we had a good story to tell, and I wanted to build my network. I thought about doing the PR ourselves but quickly realised that we had neither the time to do it nor the necessary expertise by a long way.”

The only coverage Karen had received was an article in the Daily Mail after she advertised with them, but she felt that a targeted approach could reap dividends.

She asked around and did some research and eventually discovered Cerub PR, which is based close by in High Wycombe, and which has experience working both with domestic cleaning companies and with franchising.

We are thrilled with what they have done for us. The initial strategy was to target the franchise and business press and we have had coverage in the Manager, the Franchise Specialist, Franchisor News, Elite Franchise, Fresh Business Thinking and loads of others.”

But Cerub haven’t just worked on securing coverage for the company, they have also set up social media channels and a blog and recommended changes to the company website to make it more user friendly. They also helped us commission a series of videos of the franchisees describing their Cleanhome experience by recommending a local production company which did a great job.”

They are now positioning Karen as an industry expert, for example with an article commissioned by the British Franchise Magazine on how to build a training programme. While she writes the articles, Cerub look after the blog, running everything past Karen for approval.  Cerub works for Cleanhome for two days a month, and Karen thinks the value and rewards she receives from that is huge. She receives monthly reports and has regular meetings to discuss progress and strategy.

It is quite a big investment for a small business but we have learned that PR can be the best thing to take your business to the next level. You need to pick the right PR company, to be able to work flexibly and keep in constant contact.

You also need to keep your side of the bargain to make it work, you have to be involved and give them the information they need to work properly.

Cerub always has new suggestions, and the next one is to find speaking engagements for me to spread the word about the franchise opportunities available.”

At the moment, Cleanhome’s strategy is evolving, and they are planning to target more consumer publications in the New Year. They will also be focusing on entering us into more business awards by identifying relevant opportunities and helping draft the entry forms.”

Cerub are doing brilliantly in terms of the amount of coverage they have won. In terms of their reach, it is really really good. It takes a while for franchisees to come on board, but we are finding that new enquiries now are far more ready to go ahead.”