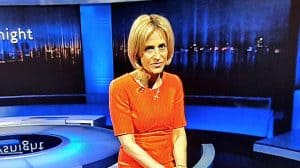 Newsnight presenter Emily Maitlis echoed the thoughts of many when she delivered a scathing assessment of the way UK politicians approach media interviews.

Speaking at the Cheltenham Literature Festival, she said they rarely answer questions and as often as not will say the opposite of what they really believe.

Another annoying development, she said, was the increasing use of three-word slogans such as ‘Get Brexit Done’ in place of political debate.

Maitlis said it has almost reached the point – although not quite – where extensive research for political interviews is a waste of time as difficult questions will almost certainly be avoided.

Asked how she would prepare to for an interview with the Prime Minister, she replied: “I’m not entirely sure it matters what question you ask Boris Johnson…”

On camera answers ‘often not true’

Reflecting on what changes she has seen in her career at the BBC, Maitlis said: “I think what I notice now is that a lot of the things that are said to us on camera on air are not particularly believed and quite often not true.

“It’s an extraordinary position to be in when you’ve had WhatsApp messages, text messages off record.

Among the examples she gave were interviews with cabinet ministers discussing former PM Theresa May’s attempts to get her Brexit deal through parliament.

“It’s a really weird position to be in as a journalist because quite often you can be sitting there interviewing somebody and they say, ‘There’s absolutely no doubt we are going to get Theresa May’s deal through… and we are going to get the numbers’,” Maitlis said.

“Then the camera stops running and I go, ‘So how many do you think you’re going to lose by?’ and they reply, ‘About 80’. “And you think, ‘Wow, that was three seconds later’.”

Why it’s better to answer the question

She said one consequence of politicians dodging questions was that she had come to “appreciate” interviewees who were willing to engage in meaningful debate.

“I think increasingly I have really come to appreciate the people or the politicians or the interviewees of any stripe and size who are able to answer a question and it seems such a small gentle thing to demand in 2019 but it has actually become the biggest ask we can make.”

Ask most people and they will tell you they share Maitlis’ frustrations with politicians. It is not just the fact that they constantly ignore questions but the way they do it, not even acknowledging them and often talking about something completely different. It puts audiences off and their messages fall flat.

Yes, the aim of media interviews is to deliver two or three key messages, whatever they might be. But the way you do it is of crucial importance.

Be polite and if a question doesn’t suit you at the very least acknowledge it before moving on and making an important point. That way you’ll create a positive impression and keep the audience and the interviewer on your side, and they won’t keep repeating the question and highlighting the fact you are not responding.

For more advice on how to give effective interviews – and answer the question effectively – we offer a range of bespoke media training courses. Contact us to find out how we can help you.