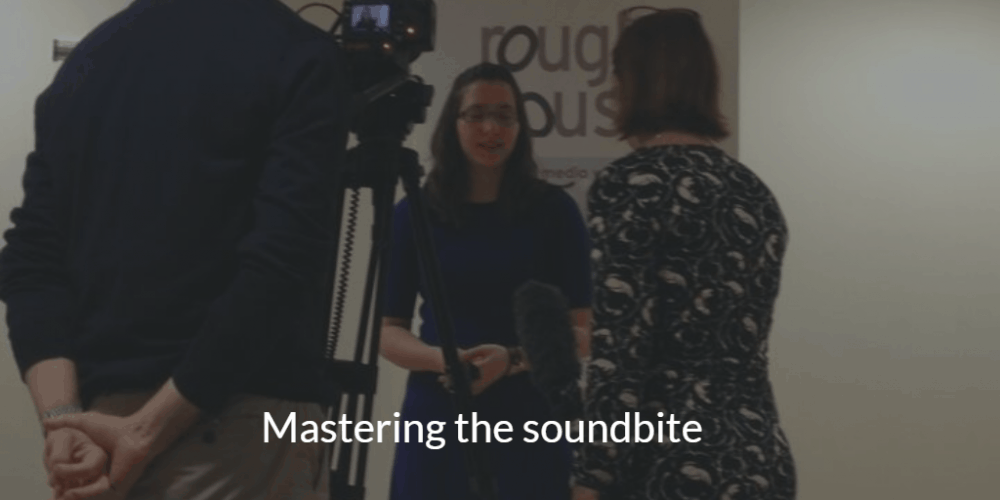 Soundbites: first of all, what are they?

Well, they’re probably the most commonly used type of broadcast interview, and also, one of the trickiest.

They’re that short section of interview you hear in a pre-recorded report on either TV or radio, or a short snippet from an interviewee in a radio news bulletin.

And they’re one of the trickiest forms of interview to master.  Yesterday, we held a training session which focussed on radio interviews, and one of the mock interviews we practised was soundbites.

As always our trainees found the soundbites the most difficult to master.

They tried again and again to produce a perfect answer, but in the end, no-one quite made it. (though they all provided us with soundbites we could have edited then used within a report)

Why? Well, the perfect soundbite is an art: it has to be just the right length; it has to encapsulate the essence of your key message in one sentence; it has to make it clear what the question was; and it can’t refer back to previous answers – i.e. it has to be self-contained.

Most soundbites are about 15 seconds long. Sometimes as short as 10 seconds, sometimes up to 20 seconds. Now that doesn’t sound much, but on the basis that we speak 3 words a second, that’s 45 words. Plenty for you to get your point across in a short, snappy and interesting sentence.

When a reporter contacts you and asks you to do an interview for a piece they’re doing about Wikileaks, or student tuition fees of the impact of snow on the airlines, then what they probably mean is they want a soundbite – one short sentence of your pearls of wisdom within their report, and most of what you have to say will never grace the airwaves.

However, this is still a good opportunity to put across your organisation’s point of view and raise your profile, so well worth doing.

Generally, the interviewer will probably know what he or she would like you to say before they turn up.

Stick to the point

That’s fine if you agree with their agenda. But there’s a bit of a problem when the interviewer wants you to say one thing, and you want to convey a completely different message. Just, make sure stick to your guns and don’t get drawn into the reporter’s agenda – if you do, then you can bet your bottom dollar that will be the soundbite they’ll use in their report.

In general, whatever their agenda, the interviewer wants you to give a good answer, which they can use without having to edit it, especially if they’re near their deadline.  So they will help you out, and might well ask you the same question several times until they get one they can use.

They might ask you to give the same answer but a bit shorter, or to combine this bit of that bit, or to say the same thing, but start with the words ‘The survey …’, ‘this government …’, ‘our newest phone app …’ (since you won’t hear the reporter’s questions within the report, you need to be clear exactly what you’re talking about in your answer).

One tactic I use in interviews is to ask the most important question – the one I want the answer to – at the very start, which usually results in an answer which is far too long. I then ask a few other irrelevant questions, just to get the interviewee comfortable, then ask my first question again. By then, the interviewee has warmed up, and will provide a soundbite of the perfect length.

And another thing: it doesn’t matter if fluff it, or ask to have another go. It’s pre-recorded so no-one will know.

But it’s vital to remember that the reporter will only use one short answer from your interview, so you need to make sure that whatever they ask, you encapsulate your key points within your answer, so whichever answer they choose, you make sure you get your message across.

And don’t say anything that you don’t want to be broadcast!

But what was the most important message that our trainees took away with them yesterday? It’s crucial to think about what you want to say in advance. Preparation is the key to success.

If you want help with soundbites, or any other kind of broadcast or print interview, contact us on 020 8332 6200 or info@roughhouse.co.uk