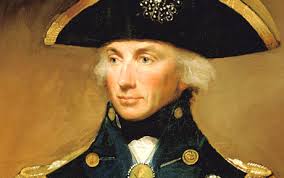 Several years ago I worked on the BBCs commemorations of the bicentenary of the Battle of Trafalgar (it was indeed seven years ago – 2005).

Working with the lovely presenters Dan Snow and Neil Oliver, we produced two programmes. The first was a fantastic live ‘Beat Retreat’ in the presence of the Queen at HMS Victory. The second was a magazine style show which examined Nelson’s legacy.

And for that, all we needed to do was look around us – it was everywhere. Everywhere from the beating heart of London,Trafalgar Square, to Admiral Insurance to every Nelson Road, Nelson pub, Trafalgar School …

That battle, 200 years ago, has seared itself onto the national consciousness like no other.

And that’s probably despite the fact that most people probably have no idea where Trafalgar is, or quite what it achieved (as I remember, it essentially checked Napoleon’s European expansionist ambitions, but historians, correct me if I’m wrong)

The key thing for most people is that it was a fantastic naval battle which Britain won against the odds, the fleet was led by our most famous naval hero, Nelson, and he died in the attempt.

Now interesting as all that might be, particularly if you’re a bit of a history buff like me, but what’s it got to do with media and PR?

Well, quite a lot actually. Because Nelson was a man that created his own legend.

It’s no coincidence that he’s the sole British admiral that most of us can probably name.

While there is no doubt he was a fantastic naval strategist, and a bold and inspirational leader, he also wasted no opportunity in letting his adoring public know about his exploits.

He was the ultimate self publicist and he loved the attention and acclaim that he received. Here are just some of his PR tricks

Also this activity had the desired result – the nation loved him and went into national mourning when he died.

He had a state funeral and dozens of memorials sprang up around the country. And of course, his legend and popularity has persisted down the centuries, one of the most successful PRs in our history.