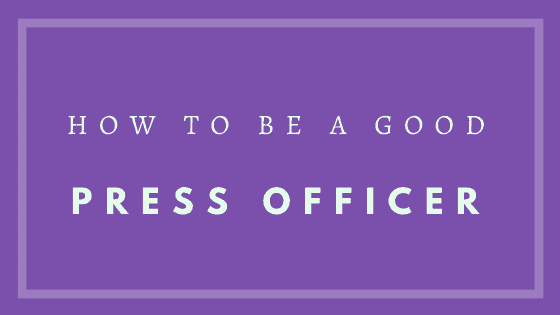 Over the past few months, I have been speaking to a very well known national statutory body (which shall remain nameless) about running media relations courses for their press officers.

This particular body does not have a great reputation, nor does it get a particularly easy ride in the press.

My contact at this organisation was the Head of Media, and the last time we spoke, she revealed she was leaving and suggested I call and introduce myself to her successor.

This I tried to do last Thursday afternoon.

And that is where my problems started.

I looked online to find out the name of the new Head of Media, but it was nowhere to be found.

So I called. Someone in the press office answered. I’ll call her Beryl.

I asked the name of the new Head of Media.  Beryl asked me why I wanted to know, so I explained the background.

She stalled a bit, then went off to talk to someone else.

After a couple of minutes Beryl came back to tell me that there was no money in the budget for training so there was no point me speaking to the (still nameless) head of media.

I said I understood everyone’s budgets were stretched at the moment, but could I have the name of the head of media anyway, so I could update my records.

And Beryl repeated her mantra about there being no budget.

Of course, being a journalist by trade, and therefore not liking to take no for an answer, I pressed her.

But speaking to Beryl was like speaking to a brick wall. All she could tell me was that there was no budget. She refused to even reveal whether there was a policy about not divulging her boss’s name.

In the end, she suggested I email her (or at least their ‘media@’ address) with my request for the name.

Let me repeat: I have had to submit a written request simply to find out the name of the head of media at a national, publicly accountable quango.

So far, I have not received a reply.

Now Beryl is probably the first person journalists come into contact with when they call this organisation (she’s answered the phone to me before).

No wonder it doesn’t receive a good press.

No wonder they give it a hard time.

No wonder the previous head of media wanted to train her staff in how to deal with the media.

Because is that’s how she deals with even benign inquiries, then the media are hardly likely to be well disposed towards the organisation.

One of the golden rules for press officers handling the media – whether it be responding to an inquiry or doing an interview – is that even while standing your ground, you need to appear helpful and accommodating – and not to annoy the media, as this can backfire spectacularly.

We run PR training courses in which we put teams under pressure through role play exercises. In these, the press officers deal with inquiries from the press (good and bad) then are critiqued, so they can see the impression they make and the consequences of that in terms of coverage.

What a shame for her employers that Beryl will never get to do that course.

We can design a course that will help your team improve how they handle media calls, and general PR skills, as well as, crisis communications and writing training. Contact us for more information.